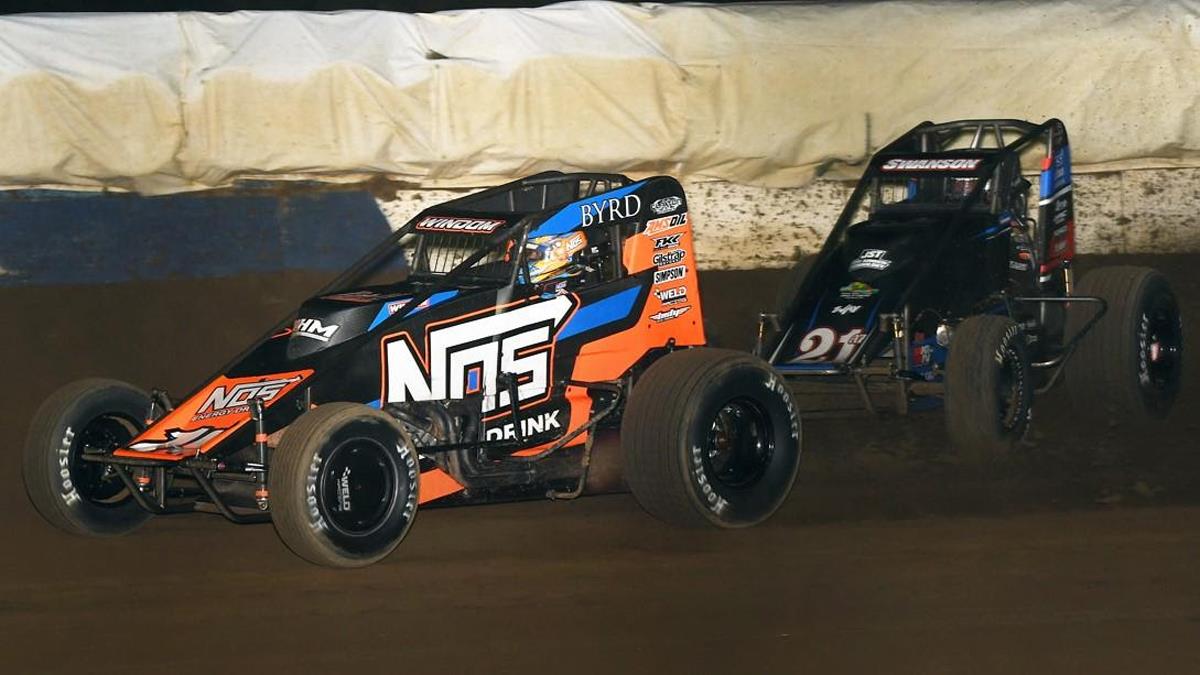 None have been greater in this era at the western Indiana dirt oval than Chris Windom who engineered his eighth career series victory at Terre Haute on Friday night, elevating him into a three-way tie with USAC and National Sprint Car Hall of Famers Gary Bettenhausen and Jack Hewitt as the track’s winningest USAC National Sprint Car drivers ever.

“That’s pretty surreal,” Windom acknowledged. “I wouldn’t have ever thought I would get to this point. To tie somebody like Jack Hewitt, who I feel like has never lost on a half-mile when he raced, is pretty cool. This place has been good to me over the years. I love coming here anytime we can and, hopefully, we can get one more win to take over the lead solely.”

Windom started third on the grid in the 22nd running of the Jim Hurtubise Classic Presented by Terre Haute Chevrolet, but quickly put himself into position to track down racelong leader Jake Swanson on the 18th lap of the 30-lap feature, then motored away to for his second series win of the year in his Hayward Motorsports/NOS Energy Drink – Byrd – B & H Contractors – AMSOIL/DRC/Claxton Mopar.

The Canton, Illinois driver entered the event as the only four-time winner of the Hurtubise Classic and left the premises as the lone five-time victor of the event in 2011, 2016, 2017, 2020 and now 2021. Furthermore, his 30th overall USAC National Sprint Car win equaled him with Tyler Courtney for 16th on the all-time list.

It’s been a season that Windom readily admits has been somewhat of a rough go with “off nights” arriving more often than preferred throughout the campaign. It’s been a season in which the highest of highs have both come at Terre Haute after capturing his only USAC Sprint Car victory of the season there during the Tony Hulman Classic in May.

This one was special. This place is special. And when Windom was close enough to make his move on Swanson just after the halfway point, he went all-in and it ultimately paid off with what was truly a historic Terre Haute milestone win.

“I just love this place,” Windom exclaimed. “I love the speed and the technicality of it also. Our cars are just always so good here. Jake (Swanson) was really good early on and I felt like I would catch him, but he’d kind of pull away. When I got close enough to make a move, I had to make a move there. I knew I cleared him, but I knew it was close. Once you get to lapped traffic, it’s really hard to get through. I wanted to clear him before we started getting into heavy lapped traffic because I knew we had the car to win.”

Pole sitter Robert Ballou edged ahead initially at the start of the feature entering turn one, but Swanson quickly assumed control utilizing the outside groove, narrowly eclipsing Ballou at the stripe by a half car length at the conclusion of the opening lap, a position he’d remain in for the majority of the distance.

Just a tick later, Windom crawled the bottom around the inside guardrail to go past Ballou between turns three and four to slot into second on the third lap.

Meanwhile, Swanson was in the midst of constructing a 1.5 second lead, which began to shrink ever so slightly once he thrust himself into traffic by lap nine, seeing his lead dwindle by half in that time frame to where Windom had roped him in to within two to three car lengths.

By lap 12, Windom was able to position himself underneath Swanson entering turn one. Swanson biked slightly as he lifted both left side wheels while the right-side wheels were simultaneously nestled snugly on the cushion. Swanson pressed on and kept Windom at arm’s length for the time being.

Splitting high and low between lapped traffic proved seamless for Swanson, yet a slight bobble in turn two on lap 17 proved to be his undoing as Windom instantly closed the gap between he and Swanson’s rear bumper. Windom cut to the inside and attempted a slide job on Swanson for the lead to no avail, falling into line briefly before restuffing the cannon and taking aim once again in between the first and second turns.

There, Windom stuck his pass of Swanson, sliding from the bottom to top and forcing Swanson to ‘whoa up’ then watch Windom make his exodus down the back straightaway. Swanson remained just a car-length-and-a-half back until getting in above the cushion between turns one and two on lap 19, dropping him to half-straightway back, and spelling the end for Swanson’s hopes and spelling good fortune for Windom on this particular evening.

Although tough sledding through traffic proved the be the path after surpassing Swanson with 13 laps remaining, Windom had no qualms, no issues and no hesitation as he stretched his lead out to 3.289 seconds by race’s end with Swanson a distant second, Ballou third, point leader Brady Bacon fourth and Kevin Thomas Jr. fifth at the checkered.

I’m really tired of losing,” Swanson laid out. “The fact that we’ve done what we’ve done in such a short amount of time, I can’t thank them enough for the opportunity. Obviously, it’s frustrating, and I think we’re due for a win. We’re hungry for it and we’ll just keep plugging away.

It was just one of those deals where I could tell (Windom) had the line, so you’ve got to make a choice as a driver whether to try and drive around him or whether you’re going to try to cut underneath him. He did a good enough job sliding me to where he landed right in front of the racecar, and I couldn’t really make either decision. It just broke my momentum and that’s why he’s a good racecar driver.”

With his third-place finish, 2015 Jim Hurtubise Classic winner Robert Ballou (Rocklin, Calif.) recorded his best finish with the series since a second-place result at Selinsgrove (Pa.) Speedway in June of this year aboard his Ballou Motorsports/Suburban Subaru – Berks Western Telecom/Triple X/Ott Chevy.

“I came here tonight with a totally different package, trying to get my balance right and I’ve struggled all year to get that,” Ballou explained. “It was awful, so we threw the notebook at it and got it better. With the track changing the way it did, I don’t have my shocks exactly where I need to be and, hopefully, by tomorrow we can get a little bit better of a gameplan and can finish two spots better.”