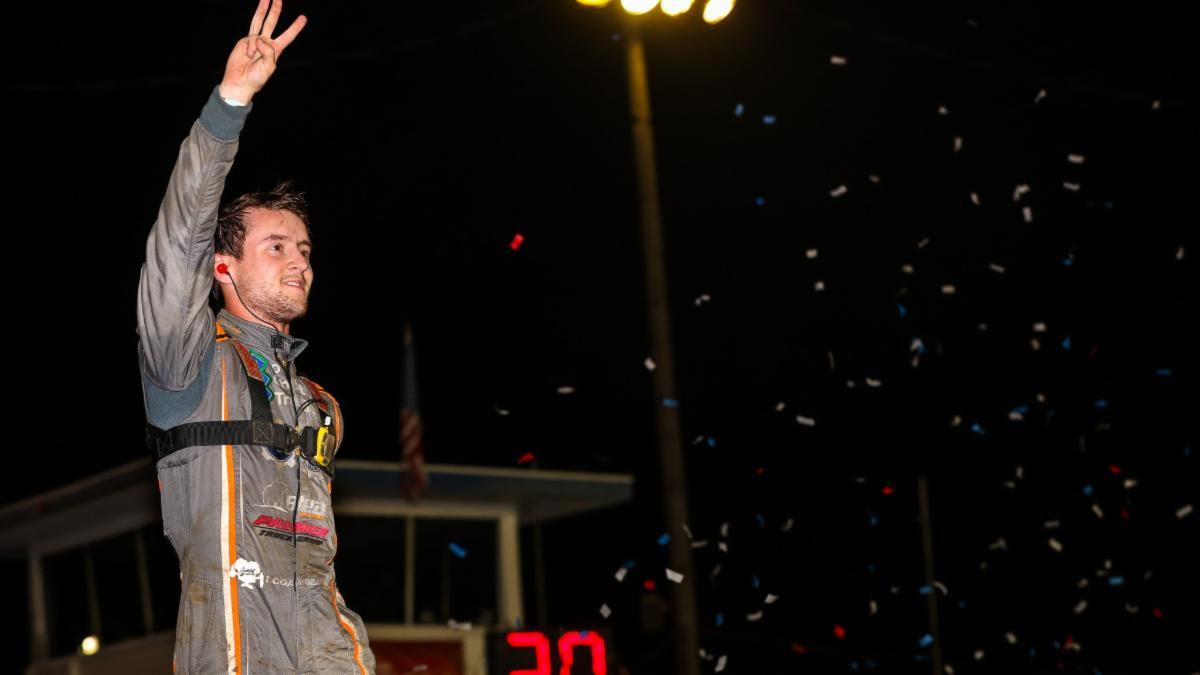 By Richie Murray, USAC Media (Terre Haute, IN) -- Logan Seavey entered the start of this past week with just two career USAC AMSOIL National Sprint Car feature wins in a span of 50 starts.

In his three most recent series starts, the Sutter, California native has surpassed his entire win output throughout his first three seasons by scoring his third consecutive victory on Wednesday night at the Terre Haute Action Track, round four of NOS Energy Drink Indiana Sprint Week by AMSOIL.

Seavey’s trifecta of victories began Sunday at Lawrenceburg Speedway, continued Monday at Gas City I-69 Speedway and now has reached official “streak” status with his third win in his last three tries, leading all 30 laps at Terre Haute aboard the Baldwin-Fox Racing/Fox Paving – Claxton Engines/DRC/Claxton Chevy.

The third win of Seavey’s personal hat trick was special in a myriad of manners, but most of all, it came at Terre Haute, a place in which so few have tamed throughout its 60-plus year history. A win at this place is something special, something memorable, something remarkable. Seavey was all of those things and more on Wednesday night at the Don Smith Classic.

“To win at Terre Haute is unlike anything I’ve ever done in my career; this is awesome,” Seavey exclaimed. “To beat (Justin) Grant too just makes it that much sweeter. He’s one of the best here and I had to run 110 percent every lap to keep him behind us.”

The longest winning streak in Indiana Sprint Week history belongs to Jon Stanbrough with four-in-a-row between 2006-07.

What makes Seavey and Baldwin’s ongoing magical ride during the past week even more astounding is that, in their first eight USAC feature starts together since teaming up in early May, the best finish they had managed to this point was a 9th at Plymouth (Ind.) Speedway on July 1. Although, we’d be remiss if we didn’t mention the multiple wins Seavey and Baldwin have achieved together on the local level this year at Lincoln Park and Kokomo Speedways.

Call it “clicking,” hitting your stride,” or what have you, but Seavey and the Baldwin team have positioned themselves as the team to beat, although that proposition has been one that other teams have found impossible to accomplish over the past three races.

“I don’t know what it is,” Seavey admitted. “We’ve raced a lot around Indiana this year and have been really good. We went to Eastern Storm, and we were not good at all. We were down on confidence quite a bit, then showed up this week and we’ve just been on kill every lap. I feel like I’m finally running good races again. It’s been awhile since I’ve put some good races together and I feel like I’m finally doing that. I’m just able to show how fast this car is. (Crew chief) Derek (Claxton) is so good, and he deserves every bit of this.”

Seavey hooked the pole for the start of the 30-lap feature and quickly established his presence at the front of the field on the opening lap, hugging the inner guardrail as he motored by outside front row starter Nick Bilbee. Meanwhile, fourth starting Justin Grant took the high road past Chase Stockon in turns three and four for third, then laid down a slide job on Bilbee for the second position entering turn one on the second lap.

A two-car break headed by Seavey and Grant forged an unstoppable force in the early going until the ninth lap when Robert Ballou and Eddie Tafoya Jr., running 14th and 15th respectively, simultaneously flipped after contact on the back straightaway. Both drivers were uninjured, but the night was finished prematurely for both.

When the field began to roll once again, it was discovered that third-place running Kevin Thomas Jr. had a flat right front tire. Under the caution, Thomas paid a visit to the work area where the KT Motorsports team went to work, swapping out the tire for another before rejoining the field. Thomas subsequently charged from the tail of the field to finish seventh.

On the ensuing lap nine restart, Grant fired off a slider into turn one, clearing Seavey by three car lengths midway through the corner on his way up to the cushion. Meanwhile, Tanner Thorson pulled completely even with Grant as he worked the bottom. Seavey, now momentarily third, shot the gap exiting turn two and split between both Grant and Thorson to reclaim the lead.

A handful of laps of utter perfection sent Seavey from being on the receiving end of being slid to holding a full two second lead in just a couple of laps. That remained the interval throughout the middle stages of the race. However, with 10 laps to go, Grant, the defending winner of Terre Haute’s Indiana Sprint Week feature, began to steadily close the gap a couple tenths at a time.

Down to one second with 10 to go, Grant relentlessly pursued Seavey on the high side as the pair cruised by a steady wave of lapped cars occupying the low line around the inside guardrail.

Five car lengths, four car lengths, three, two and, finally, just one separated the two entering turn one with four laps remaining. Grant never quite found the space to make a slide job attempt a reality with the low line being occupied. A slight blip against the turn two cushion with two laps remaining all but settled the score as precious real estate was lost and the laps tick, tick, ticking away.

Although Grant made up the ground that he lost by the next lap, he couldn’t gain back the time. Seavey, on the other hand, had an open E-ZPass lane ahead of him as he navigated the high side around the speedway to lock up yet another feature victory by a 0.756 second margin over Grant.

More than 10 seconds behind the top-two at the finish line was Chris Windom in third with Brady Bacon fourth and Jason McDougal bringing it home fifth after starting 15th, which brought him KSE Racing Products / B & W Auto Mart Hard Charger honors for the evening.

Seavey has quickly put himself into Indiana Sprint Week championship contention with the trio of winning performance, and now stands just four points behind the ultra-consistent Bacon with three races remaining. Right now, Seavey's the unbeatable machine that nobody’s been able to stifle over the past week. The amazing run continued Wednesday at Terre Haute, a venue which Seavey conceded was not his forte, until this night, that is.

“I thought, going into this week, that this is probably my worst track on the schedule, and we showed up and won,” Seavey noted. “It just goes to show how good these guys are and I’m just glad to be driving it.”

“I could reel him in, but I couldn’t do much with him once I got to him,” Grant acknowledged. “We had a good car, but It was hard for me to do anything. I could get to him but then the exits were kind of slick. So, you were just running on momentum. When I got to him, it was tough to mount enough of a charge to slide him. I thought that one restart was my chance at him there, and I slid by him and got up over the cushion, then he was able to get me back at the other end. That was kind of it. I got tight and up near the fence at that point, then we were having to chase him back down. We could get to him, but I really feel like I could’ve followed him around another 30 laps. I don’t know if we would’ve been able to do anything with him barring a major mistake out of him, but he didn’t make any.”

“This is our place, so it’s upsetting when we don’t win here,” Windom stated. “I couldn’t get rolling enough there early in the race. Those guys just didn’t make any mistakes. Once I got back to third, I felt like I was just as good as them, but I started searching and they got away from me and there was never a caution to try and race them again. I was just searching there a lot, trying to hope a caution would come out and I know where the best line to be was. To get this car back in the top-three feels good and I hope we can click some more off the rest of the week.”

In Fatheadz Eyewear Qualifying, Kevin Thomas Jr. (Cullman, Ala.) recorded his series-leading sixth fast time of the season with the series and the 35th of his career, which tied him with Rich Vogler for eighth on the all-time list.