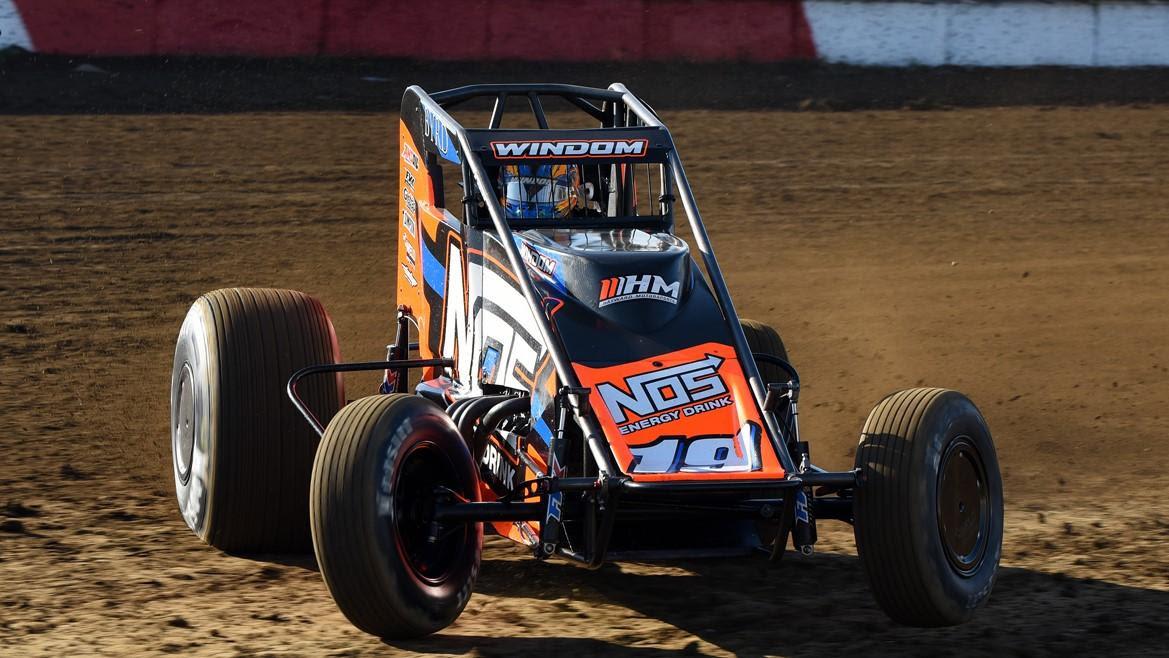 By Richie Murray, USAC Media (Terre Haute, IN) -- In the 51-year history of the Tony Hulman Classic, only a select few drivers have won the race on three occasions: Cary Faas, Levi Jones, and now Chris Windom, who snagged his third career rifle, and second straight, following a spirited duel Wednesday night at the Terre Haute (Ind.) Action Track.

Windom (Canton, Ill.) assumed the lead from racelong leader Justin Grant with just four laps remaining, which included a mix of wheel-to-wheel contact for both, broken hearts for one party and pure ecstasy for the other when all was said and done at the conclusion of the 30-lap main event.

Furthermore, Windom became just the fourth driver to win consecutive Tony Hulman Classics, joining Steve Butler (1987-88), Levi Jones (2008-09) and Robert Ballou (2015-16), while his seventh career USAC AMSOIL National Sprint Car win at Terre Haute moved him to within one of Gary Bettenhausen and Jack Hewitt as the winningest driver in the history of the track.

However, in the present tense, akin to the 2020 season, the Hulman Classic provided a Shangri-La of sorts for Windom and his Hayward Motorsports/NOS Energy Drink – B & H Contractors – AMSOIL/DRC/Claxton Mopar. For the second straight year, the event played host to the team’s first series win of the year.

“We’ve been trying to win a race all year long; we’ve been so close,” Windom exclaimed. “The crew has worked so hard to get us into this position. To put this car into victory lane here again, especially at the Hulman, is really cool.”

Windom’s nemesis throughout was Grant, who started from the pole, while Windom began his journey from the sixth position. Grant was poetic early on, constructing a commanding lead of nearly two seconds by the tenth lap while, simultaneously, Windom was working on Kyle Cummins for the runner-up spot, which he secured by diving underneath Cummins at the entry to turn three.

As soon as Windom raced into second, Grant’s interval over Windom melted like an ice cube in the sun as Windom caught up to Grant’s tail tank within three laps and commenced the pair’s negotiation through the back end of the field as they passed under the crossed flags signifying the halfway point.

As each opportunity at the lead flashed before Windom’s eyes, it was if somebody slapped his hands to keep him out of the cookie jar. First getting caught behind a lap car on lap 18, then blasting the turn four cushion on lap 19, Windom was relegated to constantly catching and regrouping rather than catching and passing for the time being.

With nine laps remaining, Windom found the clearance to a pathway to get by Grant. Windom set up a slider halfway down the back straightway and dove underneath Grant, up to the top, between turns three and four. Grant refused to let his guard down and ran his line without letting Windom occupying any of his space. That resulted in Windom sliding over the turn four curb and coerced him into having to play catch-up once more.

“I think we had, by far, the car to beat,” Windom believed. “It was just track position. Once I got to second, he was almost a straightaway up. Lapped traffic was so tough because he’d slide a guy and I’d have to follow him and lose time and I’d have to run him back down. It was all about slide jobs and trying to time it the right way. At this place, you get strung out so fast. You can’t follow a guy when he slides a guy. You’ve got to try to keep your momentum up and carry speed to get back to him in the next corner. You’ve got to go the opposite direction of where the other guy goes.”

Grant, a previous Don Smith Classic and Jim Hurtubise Classic winner who was in the midst of pursuing his quest in joining Windom and Chase Stockon as fellow winners of “the big three” USAC National Sprint Car events at Terre Haute, had fended off every challenge presented to him by Windom. That is, until lap 27.

Windom, mimicking his first attempt to pass Grant in turn three five laps earlier, threw the slider once again. However, the outcome found a completely different result the second time around. Windom’s right rear tire and Grant’s left front tire connected, sending Grant entirely airborne before landing on all fours, kissing the concrete wall, and powering on, albeit in the second position while Windom overtook first and sped away to an ultimate 2.607 second advantage and a surefire cinch to take the checkered flag at the point.

“That was such a fast-paced race,” Windom remarked. “I ran Justin down three or four times; I slid him once and he crossed me back over. It was so slick down there, the second time I went to slide him, I got super backed into it and I backed up into the front of him. I’m sorry to get into him there, but he would say the same thing. We’re out here racing for a living and not out here to make best friends with everybody.”

With Windom having the checkered in sight exiting turn four on the final lap, the race was relegated to a halt with 15th running Chase Johnson flipping into the outside turn four wall/fence just in front of Windom. That brought out the red flag and created a green-white-checkered scenario with Grant directly behind Windom on the ensuing restart.

Windom’s restart was smooth as silk as he shot away to a healthy advantage instantaneously while Grant’s dreams crumpled in turn two as he bumped the cushion, lost ground from second that ultimately dropped him back to fifth. All the while, Windom ran away with it to collect his 29th career USAC National Sprint feature win by a 1.939 sec. margin.

Meanwhile, Grant (Ione, Calif.) was barely denied a first Hulman Classic victory in his own right, and he explained the moment that took him out of contention for the win and dropped him back to a fifth place finish at the close.

“I’ve been on the other side of that before and I leaned on Chris a few laps earlier,” Grant wrote in a tweet. “(I) can’t be mad. It knocked the (Jacob’s) ladder off and I was hanging on after that. Wish we could’ve gotten back after him on that restart.”

Finishing second was Kyle Cummins (Princeton, Ind.) in his Rock Steady Racing/Mid-America Safety Solutions – Project Oversight/Mach-1/Cummins Chevy, who had recently won his first career feature event at Terre Haute in early May with the Midwest Sprint Car Series. His previous career best Hulman Classic result came in a 9th place effort in 2017, a big boost to the driver’s confidence for competing on the half-mile dirt oval.

“This is kind of a win for us,” Cummins admitted. “Windom is unbelievable around here, and so is Brady. This is my first USAC podium here. Confidence here is all it takes, and I have a little bit now, so I can kind race with them, which makes it fun.”

Brady Bacon’s remarkable comeback story at the Hulman Classic was one that will be talked about for a long time to come. His night began with him earning his 40th career USAC National Sprint Car fast qualifying time, surpassing Levi Jones for fourth-place all-time. In the first heat race, however, Bacon nearly touched the clouds in a sky-high crash that sent him flipping viciously over the turn one wall aboard his Dynamics, Inc./Fatheadz Eyewear – Elliott’s Custom Trailers & Carts – TelStar/Triple X/Rider Chevy.

Following the incident, Bacon and the team rolled out the backup car that he had run as the primary late in 2020 at Terre Haute and again, most recently, earlier this month at Ohio’s Eldora Speedway. Subsequently, the three-time series champ raced from the tail (14th) to finish 3rd and transfer to the B-Main. And, to cap it all off, he made another charge from his 9th starting spot to a 3rd place finish in the feature.

“I was pretty confident in my guys that everything was ready,” Bacon said. “I wasn’t really too nervous about going back out there. I knew I had to get by a lot of the slower cars in the B, and after a couple of laps, you get back into the rhythm and start thinking about how you can make your car even better.”